So, how did the Stratocaster begin? At this point, you may be thinking “there is no such thing as a 1953 Fender Stratocaster”… But, they had to start somewhere right?!? Just like any great product they started with a prototype. Maybe a couple of them but there is only one that has been documented.

The company had built the first solid-body electric guitar. Not steel guitar like the frying pan models in the 20s and 30s. But, actual solid body electric guitar. It started as the Esquire in 1949 and quickly the name was changed to the Broadcaster. However, Gretsch was making a drum set with the same name and sent a Cease and Desist letter to Fender about the name

Anyway, that guitar was changed to the Telecaster in late 1951 after spending a few months as a No caster (they cut the Broadcaster name off of the logo until the new logos came in that said Telecaster).

What’s the point of this? Fender was getting complaints about the Telecaster from some. A lot loved it. But, there were some that complained that the body was too squared off and hurt their ribs and there wasn’t enough control over tuning with only 3 bridge saddles (instead of one per string there was one saddle for every 2 strings.).

Designing The Guitar That Changed History

So, Leo went back to the woodshed. In 1953 they started work on a new design that would change the face of music forever. It would have sleek curves cut into the body, 6 bridge saddles for further refining the intonation of the guitar, and a new floating tremolo system. Below are pictures of the only known prototype. You can see the images have a little less refined look to the guitar.

But, it’s still there. (These are original photos from Leo Fender that were given to Richard Smith to use for the book “Fender-The sound heard around the world”. 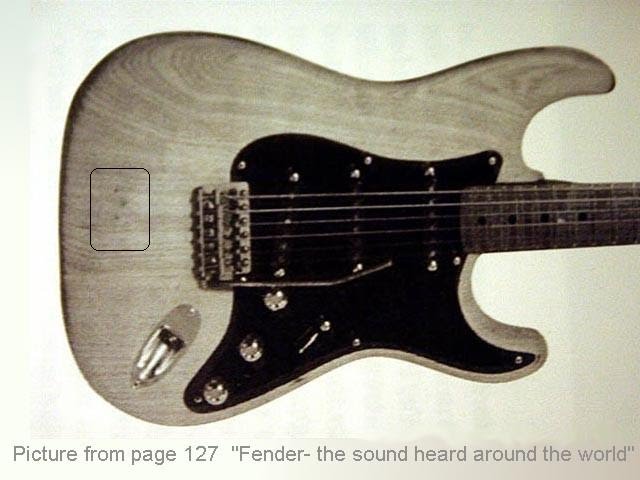 Here is a couple of images of the back taken at the Fender plant of the 1953 Fender Stratocaster. 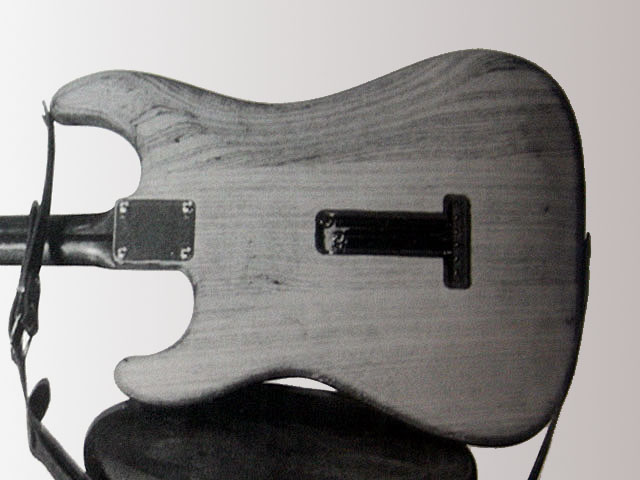 You can see on these that the 1953 Fender Stratocaster used a skinnier channel on the back for the springs and it only had 3 springs on it to be used. It was a prototype that they were trying to get worked out so it could go into production. 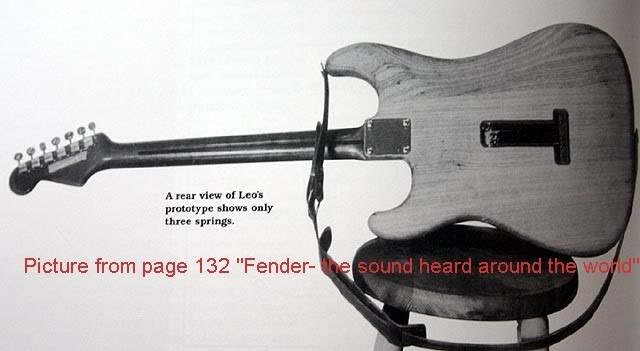 What Happened To That Prototype?

Does the 1953 Fender Stratocaster still exist? Yes, it does. It’s documented on another page available at 1953 Strat Prototype. He includes some pictures on that page that are reproduction parts and that are later 50s parts as well. So, I’m just sticking to the stuff that belonged to the original prototype.

I’m going to be taking from that content. The reason why is that most of it is from interviews with Fender staff, etc. Also, because I don’t know how long that page will be around since it’s a temp site and the owner of the guitar is trying to sell it. So, as a result, I’ll be putting most of the history on that page here.

The owner as of 2010 said that his dad worked at Fender and brought this guitar home with another worker and put it back together. There are pictures showing the owner playing the guitar in pieces as early as 1966. Here is a picture where he says that he took the 1953 neck with no logo and put it on a 1962 Telecaster. 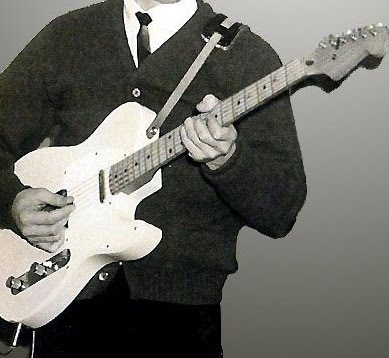 I do not believe this to the be the same neck that was on the guitar in the pictures taken at the factory. I believe that neck was another prototype neck. The reason I say that is because Bill Carson was quoted as saying that some prototypes were stolen from a storage room in 1957. And if you compare the neck shown below to the neck in the images above from the factory the finish is much darker on the neck above.

Also, the neck appears to have a ton of wear on it where the one on the telecaster body does not. That neck on the prototype in the Fender factory images had likely been played by many musicians that were playing the guitar during the testing phase. (It was common for that to happen. A perfect example of that is the image below showing an unknown musician playing the guitar in late 1953)

I do believe that neck pictured below is likely a late 53-early 54 prototype neck. Just not the exact same one as in the Fender pictures. The body, however, is the same. There is no refuting that because of the wood grain and mineral deposit comparisons.

Here are some shots (2010) taken from the tremolo block and saddles. I do believe that these are the original prototype parts as you can see that unlike the production models it has no chrome plating. Also, the stamping of the Fender and Pat Pend aren’t very deep and they are a little offset on some saddles. That would have been common during the testing phase and while trying to get the equipment set up properly.

Remember that back then they made their own parts. The only part they brought in were the Kluson tuners which were cut on the ends to make them fit on the headstock. Kluson actually didn’t make them inline like that. 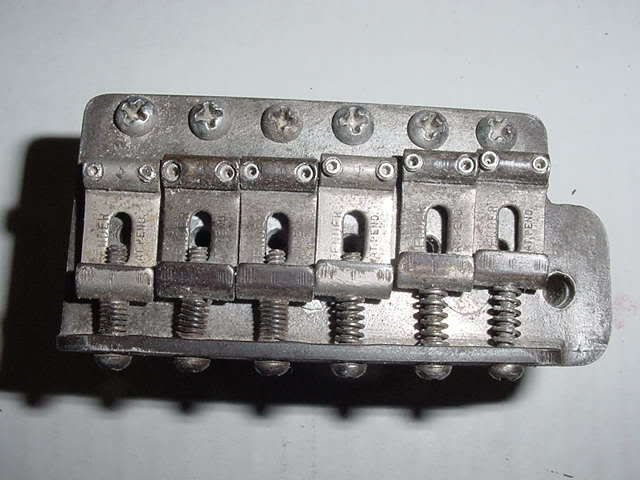 Here is underneath the saddles. Notice the slotted screw head pointing to its early 1950s date. 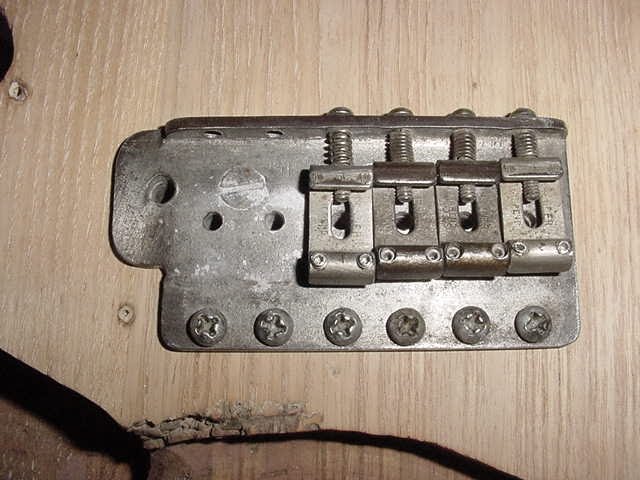 Here is underneath showing the block. Notice the 3 spring holes instead of 5.

Here you can also see some holes in the block that you don’t see on production models. No idea what they are there for. You can also see that it’s very primitive looking and that they bend for the saddle screws as well as the screw holes are uneven. 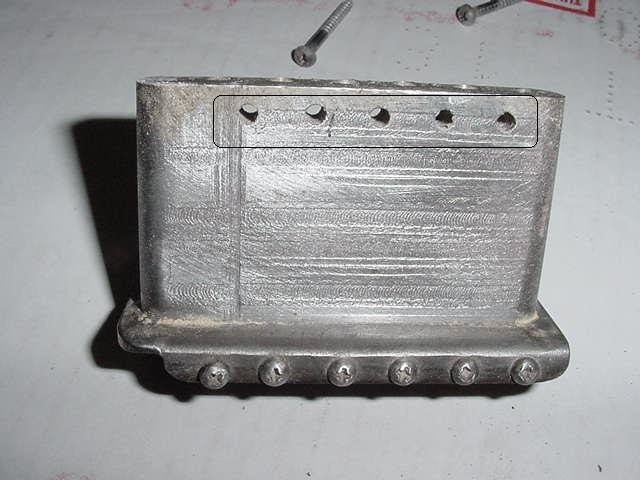 Here are some images of the original 1953 Fender Stratocaster body in question that were taken in 2010. If you look at the prototype pics you can see that it’s the original body based on the placement of the mineral deposits in the wood.

Compare that to a 1954 early production model back.

Here it is assembled with a blank neck plate from around 1953-1954. This is how it looked initially in the images above. However, the tremolo wasn’t blocked off like it is pictured. If you compare with the images from the factory you can tell that the mineral deposits and wood grain match. That’s like a fingerprint for wood. 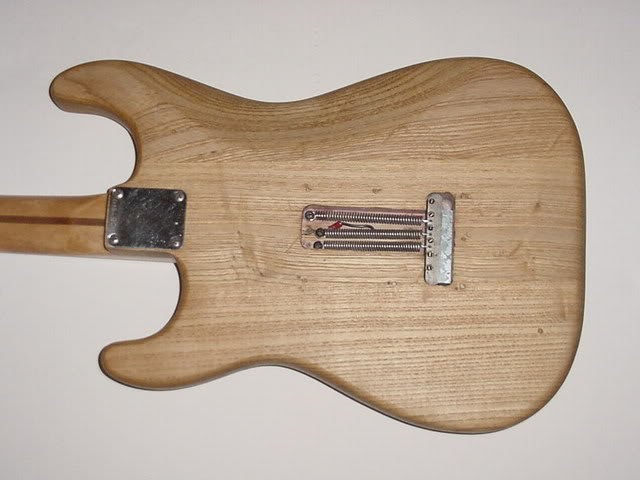 Compared to the original photo of the 1953 Fender Stratocaster:

Here is the front again compared to the original 1953 Fender Stratocaster:

Now: (notice there is no worm route. Also, the route on the bottom bout is where the owner after receiving it dug a channel to put in a switch to get the other pickup positions that a 5 way would offer. It was common back then since 5 ways didn’t exist until the 70s.) 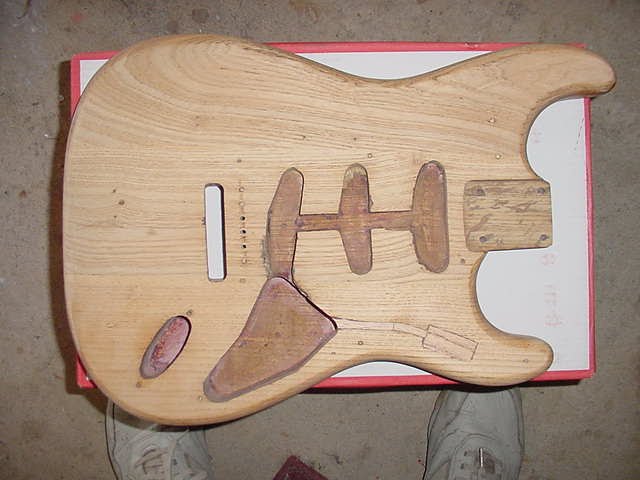 Original (The black pickguard was bakelite that they used on the Tele’s of that time. The knobs were from what would have been a 1953 Telecaster.:

See the next year’s 1954 Fender Stratocaster.
Back to the Pre-CBS Stratocaster Home Page.